Three years have gone by, and I’m not the same person I was when I first became an administrator.  I can recall colleagues making jokes of me “moving to the other side,” and I had no idea of what that really meant.  Three years later, I believe I do, and I am 100% positive that it was the right decision.

As a school leader, I couldn’t remain the same person I was as a teacher.  I enjoyed the interactions with my students- the times they were able to overcome the tough obstacles in their learning, the excitement of finally understanding a new concept, the worry before a major summative assessment, the jokes, the smiles, and ultimately the relationships we were able to build.  A large group of those students graduated about a few weeks ago, and it feels good knowing that I directly impacted their abilities to perform in the classroom, their abilities to move into the real world as adults.  But even in thinking through all of this, I still had to change.  It wasn’t just about the students in my classroom anymore, but it was about all of the students in the school.  Yes- the ENTIRE SCHOOL!  That could be quite intimidating.

I thought about this work as our leadership team visited the Rock Ranch a week ago.  We did some team building, learned more about one another, and sat down to learn about the New Art and Science of Teaching.  That’s what I love about our school and our leadership team.  Nobody is ever satisfied, and we constantly work to make sure we do what’s best for kids.  We love the faculty and staff, trust me.  But in the end, what we do for kids matters most. 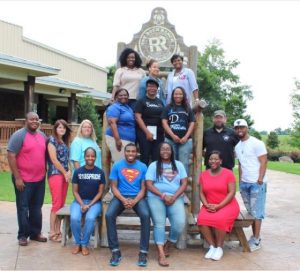 Moving into the new year, we’re about to do some radical things.  We’ve been a Model School, as noted by the International Center of Leadership Effectiveness (ICLE) for two straight years, and our boss is Georgia’s Middle School Principal of the Year for the 2017-2018 school year.  It’s time to take some risks and focus on moving even more out into the realm of success.  We’re planning to do some work with proficiency scales, which has me excited to the point where I’ve pulled out my dissertation documents again, which dealt with effective and accurate grading.  We’re also planning to move even further with blended learning, our gradual release, and our literacy initiatives.  I’ll be advising the Connections department, and I’ve even given them the theme of “Connect to the Core,” where we’ll do some cross-curricular work with the core content areas.  I know that everyone has to be vested in the work that we do if we expect excellent results.  I’m fired up in a good way, and here it is, June 14, and I’m already ready for us to embark on this journey of educating our next group of students.  That’s the passion…it doesn’t go away, but lingers.

I’ve learned more in the past three years on the job than I could’ve learned in anyone’s leadership class.  The experience with the community and the examples of effective leadership that I have been given have provided me with essential components I will need when I eventually decide to take a step off the blue tile to get my own school.  I’ve learned the importance of building a positive school culture because it drives everything that happens in the school….at least it drives everything in ours, and we wouldn’t have it any other way.