This past week took me through a range of emotions.  It pulled on my heart a bit and caused for some serious prayer to get myself on the right track.  I can’t tell educators enough that it’s important to have mentors and people to help get you back where you need to be.  All of my mentors gave me the same message through the week, which was, “Remember why you do the work you do.”  And I did just that, and it helped me to remember that building into the lives of young people each day is not only hard work, but it’s heart work.  They let us down, make us laugh and smile, make us fuss, make us cry behind close doors when they disappoint us in an extreme way, but ultimately, they also change us.  There’s a song that says, “I know I’ve been changed,” and for the past year and 1/2, that’s been the story of my life.  I know I’ve been changed, and I’ve been put in uncomfortable situations.  My constant prayer is that I learn and grow from the position of discomfort and be able to use it to help someone else.  It’s what matters most to me.

But last week I had two instances where I met with a parent and spoke with two staff members at my school.  The parent was upset and came to see me because she didn’t like the way a situation was handled.  I listened to her, tried to process it, and thought of a solution that would work not only for her but also for her child and the school.  She then said, “There’s something special about you.  You always operate in this same realm of peace.  I don’t know how you do it, but I appreciate that about you.  You’ve figured it out.”  In my mind, I wasn’t sure what she was talking about.  All I knew was that our system told us that customer service was our #1 goal, and one thing I wanted to make sure I provided was good customer service.  But I didn’t think twice about it.  I filed the meeting away in my brain and continued throughout the unpredictable day.  Later,  I met with two staff members who voiced some discontent they’d heard from some others on the staff.  I immediately told them what I would do to fix the issue, and one of the ladies stated, “See…how do you do that?  How do you just stay in such a good space and stay so calm all of the time.”  I thought about it, and the answer came immediately.  The only thing I could think about was the call I’d received back in 2013 when my brother told me our mom was no longer with us.  I thought about her funeral and how I didn’t cry, but focused on helping my family.  That was the moment that changed me, and in that moment of reflection, I realized that I would never be the same person.  Wow…and that was just Tuesday.  We still had three days to go!

Later in the week, I dealt with the normal challenges and delegated some things to my team.  One thing that I see happening this year is people stepping up to the plate to help in whatever way they can.  I’m trying not to have favorites because we’re not supposed to do that in leadership, but I do have certain people I can call on and count on to get the job done.  During the 2nd year in the driver’s seat of Kennedy Road, that’s been the one thing that has made a  huge difference in the work that we’re able to do.  Once people see the vision and buy into it, the journey to greatness is endless…ENDLESS!  So I’ve been really appreciative of the hard work that they’ve done because it’s put me in a position to take on the things that need to be handled.  We’ve had some things happen that have tried to derail us, but we stayed on the straight and narrow path.  We have some other obstacles that will come as the year progresses, but we’ll make it through because that’s what we’ve been designed to do.  There are times when God makes us uncomfortable, and during those times He tests our faith and grows us more than we would ever imagine.  My prayer is not only that He makes me uncomfortable, but also that He leads the way.  When He leads, it’s nothing but a set up for a victory!  I’ve seen it a thousand times. 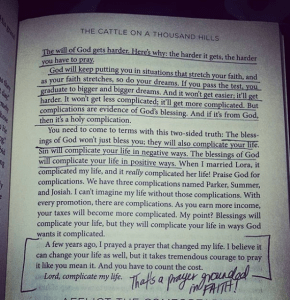 But the highlight of my week happened Friday.  One of my students has been working on some improvements.  He’s working on doing the right things consistently…a work in progress, like most of us.  He came to my office wanting to talk to me, and he was very upset about a situation that happened.  Once he explained it to me, I could see where the problem was, and I told him that part of growing up is working out problems with others.  We agreed that we’d schedule a conference where he could sit down with the teacher to work it out.  After all, he wouldn’t be with me next year, and part of what we’re trying to do at Kennedy Road Middle is build leaders and workers that will make an impact on the community after they walk out of the doors of our school.  The amazing thing was he actually facilitated the apology process with the teacher and explained why he was upset.  There was a substitute in the building that explained to him that he needed to “get out of his feelings,” and be the young man that he was supposed to be.  So, here he was apologizing and communicating what he needed to do differently to the teacher.  Again, it’s hard work, but it’s heart work.  I don’t know if that will ever happen again this school year, but being a primary witness to what happened made my day.  I went into the weekend in a good space.

Then, on Sunday a few of my fraternity brothers and I took the Kappa Leaguers to the Christian Life Center church.  I always look forward to Sundays because a good sermon gets me ready for what’s ahead.  The pastor preached and taught about how prayer was a superpower of a believer, and as he spoke and made Biblical references, many things were confirmed for me.  You see, I’d known for a long time that God placed me at the school where I am for a reason.  Truthfully, if I’d stayed at my previous school for another year, I would probably be principal there right now; however, my purpose was to enter the Kennedy Road community so He could use me and my team to do some God work…not good work, but God work.  And if I am to be completely honest, I hadn’t been as faithful in my prayer life as I needed to be before I got to Kennedy.  So the change wasn’t just made to help a school, but it was made to help me become the person I was destined to be.  It took and continues to take a daily leap of undying faith.  The work has helped me grow as an individual, and I would dare to say that building up my prayer life, this superpower, has helped us to work in a manner to change our community and the lives of our kids.  I am excited about what we have going on.  Like any other school, we have endless tasks and work to do.  Although this work is hard, we’ll continue to operate using our hearts.  The heart work will change their lives and ours as well.  It doesn’t feel good all of the time, but eventually we’ll  have to leave, retire, and let them run this world we live in.  Our collective goal is to make sure it’s a better place when we get to that point than it is now.  I have faith that it will be.  Keep using your heart to do the hard work.

Be great.  Be accountable.